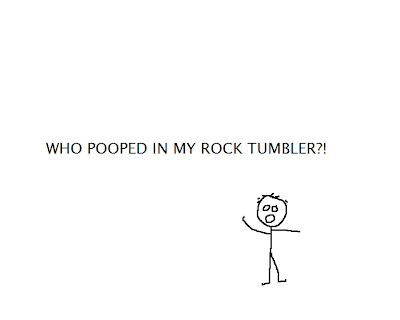 I call this one "Laziest Comic Ever". The protagonist, upon finding that someone has pooped in his rock tumbler, is shouting his question to the world while gesturing off-panel at the presumably operating rock tumbler.

To be fair, I am not truly lazy. I simply can't draw a rock tumbler. No idea whatsoever. I haven't seen one or even thought of one in years. There are probably different kinds of rock tumblers, what with the natural abundance of rocks and other small hard materials that might presumably benefit from a good tumble now and again.

I'll leave that mystery to the botanists.

I am already at work on a physics-themed Laziest Comic Ever. It's that same guy again, only this time someone has pooped in his Large Hadron Collider. It's almost done but I'm having a hell of a time translating it from Swiss to English.

Maybe someone will yell "Are you sure it isn't a Higgs boson?" This yelling person will also be off-panel.