I know I promised an amazing conclusion involving make-out parties in thatched-roof cottages, but it was a lie. It usually is.

Posted by Guillermo at 00:17 No comments: 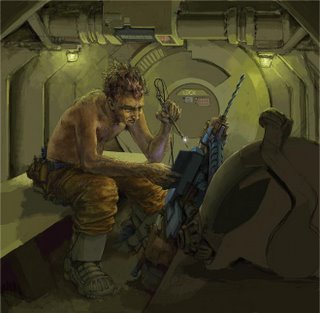 The Story So Far

"Reminds me of Mars," the pale young man said as the heavy treads of the stubby, armored land-crawler crunched to a halt at the edge of the precipice. The sepia-toned plain that had been trying to choke him to death with its dust for the past two revolutions had finally relented here to an only slightly more interesting ruddy shale that spanned across the valley to the mountains, hazy in the mid-cycle heat.
"Mars? How in Corruption would you know, kid?" The driver shook his arms out of the bulky, shoulder-length guiding gloves and pulled his goggles up. He peered at the young man with red-rimmed eyes. "You one of those nuts that think we've been there?"
"No," the young man said, peering back at they way they'd come. A plume of dust was a rising stain against the sky. It was heading towards them. He grabbed his pack and climbed over the side-shield onto the tread. "We have not been there. But we have pictures." He sat down, glanced again at the faded decal with curling edges that described the disembarking protocol, and slowly lowered himself the remaining meter to the ground. The older man laughed and jumped down. Dust leapt up angrily.
"You’re talking about the Mars Freedom Rover? Brother, you should have been entertaining me with these fairy tales when we left the Territories. Did Little Paul show 'em to you in his family photo album?"
The young man squinted up at him. "President Shrub does not take much time to socialize with us. Frankly, I don't think he even knows what we do in the Privileged Research Division."
The older man stiffened. "You’re a PR? I mean, um, you’re a PR, sir?"
"Formalities are not necessary, least of all out here. Your service has been of great help. I apologize for any inconvenience I may cause you." The young man shouldered his pack and turned towards the edge of the valley.
"No trouble at all, sir. Always happy to help the Guided Republic…did you say ‘may cause'?" A rumbling in the distance punctuated his question. Behind them, a much larger vehicle was chewing towards them like an armored caterpillar. "A Mauler? What in Corruption is the Militia doing out here?" He turned back to the young man but he was already gone over the edge, crumbling down the steep precipice in a sliding crouch. When he reached the bottom he broke into a stumbling run, his pack bouncing wildly on his back. Back on the rim, the older man slumped against the tread of the land-crawler and buried his face in his hands, and waited for the awful machine to come for him.

The setting sun was painting the sky with purples and reds when the young man reached the river. He knelt down by its edge, wincing. He dipped his canteen into the brackish water. When it was full, he opened a compartment on his belt, removed a pill, and dropped it into the canteen. It fizzed violently. After peering into the opening, he added another. "I hope you brought enough for the rest of the class," someone said. He whirled around, raising his canteen like a weapon. The water gurgled furiously as it splashed onto the dirt. A woman was smiling at him in the dim light. She wore a long robe the color of the sand. Her hair was shining black marbled with streaks of grey. She put her hands up like a child playing Militia and Robbers. "Whoa, calm down. You got me. I yield to your superior waterpower."
He lowered the canteen. "Who are you?"
"You’re wandering around on our land, so why don’t you tell me who you are first?"
The young man stiffened. "This land belongs to the Guided Republic."
"This Reservation belongs to us. The Guided Republic gave it to up so we wouldn't bother them with our heresy. Fair trade, I say. Now tell me what I’m supposed to call you. I’d like to know the name of the first person to try to hydrate me to death."
His dry, cracked lips tried to twitch into a smile but he bit it back. "I am Suik."
"Oh, I love the old names. Call me Becky."
"Becky?"
"Short for Bekenglar. I told you I love the old names." Suik stared at her. "Well, we’d better get going."
"Going?"
"You’ve come to see the village. You’ve come for the Clay."
Suik started to protest, but couldn’t think of a lie. He was still new to deception and was already developing an intense dislike for it. "Yes."
"Shall we off, then? Or are you planning on purifying the whole river?" She spun neatly on her heel in imitation of a Militia serviceman and began an exaggerated march along the river. Suik looked back the way he’d came as the last sliver of sun slipped behind the horizon. He shivered, screwed the cap onto his canteen, and hurried after her.

The walk was not long. The village was a shock to Suik. The houses (he was hesitant to refer to them as that) sat unceremoniously in a clump around an afterthought of an inlet. Most of the rectangular structures were barely taller than he. Walls of red clay and poles supported a roof made of bundled brush. Some kind of animal skin sat atop like a collapsed hat and a single entrance gave a toothless, gaping mouth to each. It was a far cry from the gleaming, antiseptic towers of the Privileged Research Facility.

Posted by Guillermo at 01:07 No comments: 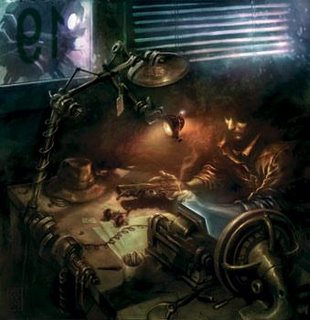 Coffee. Cigarettes. Hexadecimal Genome. And an ice cold brew for when I'm done.

Posted by Guillermo at 19:18 No comments: