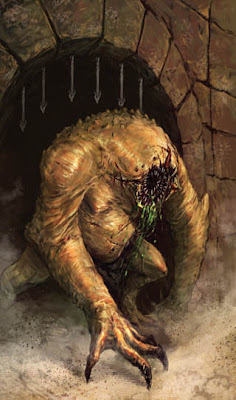 This is how most monster hunters die. They enter some evil pit of dank horrors and then encounter something they didn't expect.

The two seconds that it takes to tilt your head and wonder "What the hell is that?" is long enough for most monsters. Preparation is the key to survival.

Which brings me to the wedding. Jared Sibbitt has long been my greatest ally and mentor in surviving the wilds of the world, from the Sierra Nevada to the Waffle Houses of the Carolinas. Sibbitt will probably deny this for modesty's sake, so to be fair it was the wilderness itself that taught me the lessons; Sibbitt just made sure I stayed alive long enough to learn them.

This June, Jared and his delightful love Risa will be getting married. I have the honor of being in the wedding party as the Grooms Gurg. Quite a synthesis for me, as I only Gurg informally, up to now. It's an odd feeling, kind of a grown-up feeling, to be Gurg in a somewhat official capacity.

I will have to straddle two traditions like a pirate might straddle two large marine creatures: the ancient role of the groomsman and, in anthropological terms, relatively new role of Gurg. Hmm...I think I'll use a geological time scale from now on. Makes everything human-related look like it happened practically simultaneously.

In ancient days, the groomsmen had the responsibility and honor of battling the bride's family and their warriors, thus buying the groom enough time to convince the bride to marry him, grab the dowry and run. During these brutal, misogynistic, and awesome times a groomsman could be lost forever, or be found days later in the woods stumbling around naked and covered in Sharpie.

These days, the duties are different. Assisting with minor complications, showing guests their seats, decorating the newlyweds' canoe or what-have-you. There is also the matter of the bachelor party. At the bachelor party, the possible fates of the groomsmen are still very similar to those of ancient times.

The role of Gurg is pretty malleable, and perhaps this is its curse. I have 109 days to regain my fighting form. I have 109 days to brush up on all the random skills I've picked up over the years: making bathtub whiskey, editing 5-paragraph essays, handling poisonous insects and large reptiles, cave exploration, identifying edible native flora, arson, harmonica playing, tax evasion, first aid, rabble-rousing, rabble-wrangling, rabble certifications and permits...

Preparation is survival. If I get to that wedding and something makes me say "What the hell is that?", I am dead. Or at least lost in the forest for a while.

Posted by Guillermo at 11:06 No comments:

Roughly every 45 minutes I am required to rant about the shortcomings of various works of fantasy. These tirades tend to veer towards Twilight and Harry Potter.

My latest complaint about Harry Potter is the lack of Americans. Get some Americans in there, I say! You have students popping out of the sea and flying in on polar bears from the Arctic or where-have-you, but no Americans? Because an American would have had everything wrapped up by Book 3. We Americans know how to handle dark peoples. And we solve our problems with guns. You don't need to go to school for 7 years learning elaborate magic to kill a dark wizard. Hell, a child can learn to use a gun to lethal effect in under a minute. Very simple point-and-click interface.

An American student, had he been teleported to some strange place with a bunch of guys in robes cavorting around talking about how they were going to kill him, well, Americans can't stand that stuff. Dirty Harry Potter would just blast Voldemort in his flat face. Big-ass snake coming at you? Similar solution. Some Ministry of Magic lady coming around to take over the school? Americans know who takes over a school, and it sure ain't administrators; it's kids with guns.

There are reports of "technology" not working in Hogwart's. So what, like a hammer or a crowbar wouldn't work? You need magic to do anything? Guns are pretty simple machines. A small explosion and then point the shrapnel in the right direction. End of dark wizard.

A rich elitist young classmate and his goons giving you a hard time? See how superior he feels when he wakes up and finds his familiar's decapitated head on the pillow next to him. American-style.

America's Razor: The simplest solution is often the most permanent.

Dirty Harry Potter would have gotten away with it, too. Plenty of magic-finding devices and trained wizard detectives, but no one knows what to do if someone is garroted. "All right guys, we're looking for someone who has access to piano wire, check and see which students own pianos." 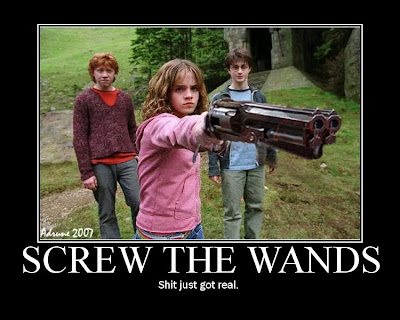 Posted by Guillermo at 11:27 No comments: 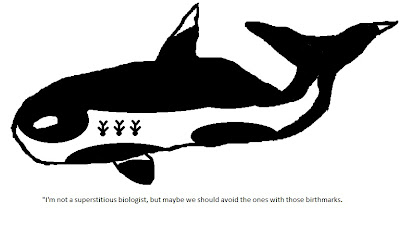 Experimenting with my drawring tablet. A lot of tinkering went into this whale. Much like all whales.

Posted by Guillermo at 23:40 No comments:


Taking apart a dryer is relatively easy, entertaining, and educational.

Now what to do with all this wet clothing.

Posted by Guillermo at 02:40 No comments: