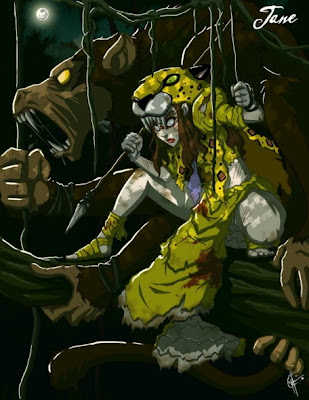 Watson and I have just returned from the pet store. Sometimes it seems I am only working to supply my dog habit. I picked up about 40 dollars worth of chew bones. It seems like a lot, but when I leave for work he's certain to chew up $40 worth of something, so I prefer springing for the dog bones. His most expensive chew toy to date has been my Nintendo DS. So in that outlook, I'm actually making money here.

This morning as I lay dreaming, I could swear I woke up to the sound and smell of the ocean. Perhaps an errant seagull had struck my window and flown away before I got my wits about me. But that explanation would just raise a slew of further questions.

I finished reading Tarzan of the Apes by Edgar Rice Burroughs. It's a rollicking good time and is amazingly offensive towards Africans, women, and gorillas. The French receive some glowing praise.

Burroughs' views are fascinating to me. This is Racism with a capital R, and yet it is so different from the discrimination I observe today. While ignorant and offensive certainly, the stereotyping is almost devoid of malice. It's just the way he understands the world and is almost to be expected when people were so...far away from each other, I suppose. Today I imagine thinking abstractly is something of a given. The Gordian Knot is my preferred example for distinguishing kinds of thinking. There's a massive knot in the city of Gordium. Nobody can untie it. Alexander the Great comes by and just slices the thing in half. For the win.

So I think I can understand why these views were so tenacious at the time. What worries me now as I grow up is that we don't have that excuse anymore. People can learn about other cultures and beliefs and political systems without great effort. But they don't.

Something practical I learned from Tarzan: lassoing my prey. Tarzan was fond of climbing above his quarry and dropping a rope down over its neck. Then he would jump down and stab it or wrestle it or both. In my case I was attempting to bring in a frightened little dog from the exercise yard at work. Small dogs are tricky. They are extremely likely to bite out of fear. Being bitten by them is not pleasant and the injury often superficial, but that isn't the reason I try to be careful. My concern is that following a dog bite, any dog bite, certain protocol must be followed according to Arizona law. It usually doesn't end well for the dog.

This little dog was snarling and lunging as I approached it. I knew the dog; I had carried it out to the exercise yard in the first place. She had only been in the shelter a day and was still nervous about the whole thing. Having been outside for a bit, I think she developed a taste for it.

When she saw that her ferocious display was not causing me to run away in terror, she took the initiative and ran. She couldn't go far; it was a small side yard. There was an electrical utility meter, a waist-high faded green metal box, on a square of concrete next to the chain link fence. My little dog had wedged herself in the right angle formed between the fence and the box. In her little foxhole she could see me if I approached from either side. I considered rushing her, but in that narrow space her 15 pounds and four legs gave her the advantage over my 220 pounds of biped.

The dust kicked up from our merry chase glowed fiery red in the setting sunlight. I pondered my next approach as the dust settled lazily around me. The thin coat of sweat on my face felt gritty. The traffic noises of weary commuters almost drowned out the low growl from behind the utility box. I grinned. This was my concrete jungle.

I made a loop in the thin black nylon leash and I crawled onto the utility box. I peeked over the edge. The little white dog was growling fiercely at the spot she had last seen me. The very spot where I now wasn't. I took a moment to feel very clever. I dropped the loop neatly around her neck. The poor dog was utterly confused and it was a few seconds before she looked up and saw me grinning down at her. Like most people, she was not pleased.

I hopped down and gently tugged her out into the open. She squirmed and snapped. When this failed she became intent on gnawing through the leash. I picked her up, cradled her in my arms, and carried her inside.
Posted by Guillermo at 15:22 No comments: