Cryptic Thought of the Day: In some cases, no news is bad news.

I predict that in the year 3000, all music will remind you of Radiohead.

Life, Vetos, and Everything

I've been musing over President Bush's veto of a bill that would have provided federal funding for stem cell research. He stated "...that in our zeal for new treatments and cures, America must never abandon our fundamental morals."

I've been having trouble understanding what he means. America, as a country, has not shied away from killing for the greater good. The most prevalent example of this is the current occupation of Iraq which is still causing civilian casulties. However, civilian casulties in times of war is not a new concept. Our leadership understands that innocent lives will be lost and we have made the decision to engage in this conflict.

Thus, if the President is rejecting the bill because he does not wish to harm innocent lives (given some people's assumption that human life and subsequent rights begin at conception,) I do not think that is entirely accurate. I think the President does not wish to harm innocent American lives. I believe his sincerity in this as the fundamental morals he referred to in his speech.

So I have come up with a solution. Federal funding for stem cell research should be provided if and only if the embryos are Iraqi.

The current administration has accepted that the loss of Iraqi life is a consequence of US occupation but it is ultimately for the greater good of the people. Democracy never seems to come about easily. There is no contradiction in sacrificing a few more Iraqi lives for stem cell research. The knowledge gained could be for the greater good of people with horrible diseases all over the world.

How many Iraqi civilians will we kill to save Iraq? Quite a few, it seems.

I wonder, how many would we kill to save the world?

Now, here is Samuel L. Jackson to provide a short summary of my feelings: 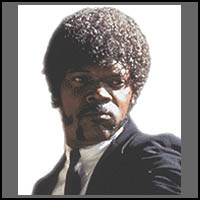 "BITCH DO NOT DECLARE WAR ON A WHOLE MUTHA FUCKIN NATION AN TRY TA TELL ME I CAN'T KILL A FEW GOT-DAMN EMBRYOS!"

Posted by Guillermo at 01:02 No comments:

I quit the pet shop today. I was hoping to keep both jobs somehow, but today was the eleventh day in a row that I've worked and my souls are frayed and strands are wisping away to join passing clouds.

And there have been clouds.

It is monsoon season, and the sun often hides and hopes we on the earth do not notice the 100 degrees Fahrenheit shadows.

The house has been quiet. It hasn't affected me much, and in being un-affected I have realized how little I venture about the rest of the house. I do much of my living in my bedroom with my books and music and dvds. Nothing like a good hermitage once and again to get the blood flowing.

It's nice to know the corporate system that replaced the feudal one still remembers its roots.

Posted by Guillermo at 23:42 No comments: