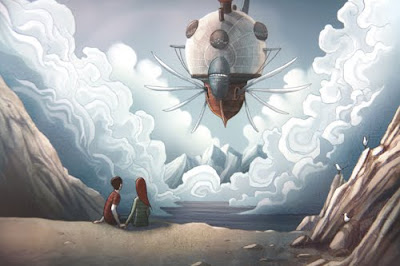 It's hard to believe I've had this webjournal for seven years. It's changed a lot since 2003; I suppose it had to along with my own stubborn progress and our preferences in mass media.

The "mass" is the biggest difference. With so much information, it has to be compressed. Even Twitter pretty much proves that people want little delicious niblets of information, and lots of them. So there's that.

I've been reluctant to bring the blog around to meet my new Facebook account for that reason. I guess I don't want to be a brand. Or maybe I do want to be a brand but only if it's a cereal with fun marshmallow bits. "Guillermo: Part of Your Complete Breakfast-Oh-Damn-He-Is-Eating-Your-Breakfast." TM.

So right, be concise. But that's not why I'm here, is it? No, I come to the internet to waste time or maybe to look up the cast of the original A-Team. Shouldn't there be more stuff like this, shouldn't there be someone going against the grain and writing long-winded doubt-filled musings on how they're dissatisfied with themselves? I have a whole stack of notebooks filled with exactly that. Probably it's most interesting to me, but this is about connection, finding common ground and sharing experiences. How many times have I believed I was in love? How many friends have I raised a glass with who I never see anymore? Should I have used "whom" just then? Why are many of the questions I had when I was 18 the same as the questions I have now that I'm 28?

The biggest difference is the hopefulness. Oh, I have plenty of pages of terrible poetry, but the hope is still there. Ironically, my impulsiveness led to the more interesting episodes in my life. Now, with my diligent adherence to my brain medication, my impulsiveness is...not very.

I can already picture people who haven't known me as long thinking, "Wait, you were even more impulsive before?!"

Well, yes. Heh, check the blog archives. I couldn't go two weeks without doing something I horribly regretted and writing a bad poem about it which I also regretted.

Seven years and many scars ago.

I'm hardly unhappy. I can still get pretty moody now and then but I don't do anything drastic. The period of time following the death of Luis does not count, because, I think I was supposed to go a little crazy and be a little terrible. Also, driving 4,000 miles was surprisingly therapeutic. Not nearly enough, but it certainly helped.

That reminds me, I kept a video journal of that particular journey. I'll have to put them up on my Youtube channel and it will probably be in annoyingly small chunks since I don't have any video-editing software.

Many years ago, my friend Juliet worked the graveyard shift at a hotel and had read everything I had ever written because she had nothing better to do. So when I was writing, it felt like I was writing to her. Not just her, let's not get all romantic here (unless you're feeling...amorous). In my head, I could picture my friends as I tapped away at my little laptop keyboard. It felt personal, and it was personal.

It was a brave new world, and I knew people by their writing. Images used to be a pain in the ass, I'd have to find a site to host them, upload them, size them, all that nonsense. So writing reigned. And it will again.

In this glut of information and meta-information, looking inward is as vital as ever. The unexamined life is not worth living, or so I hear. I've been trying to understand this world and my place in it for so long that I've become complacent. Like checking the mailbox for epiphanies. Nope, nothing today, maybe tomorrow.

I'll try harder. Theoretically, I should be smarter now today than I was seven years ago. Maybe I'm close.

But now it is time to go to bed and fall asleep listening to H.P. Lovecraft stories on my ipod. I read a science article that explained it isn't possible to read in dreams (okay, it was an episode of Batman: The Animated Series) but I can. Last night I dreamed of a huge book of illustrations. One drawing spread across both pages, showing hooded monks working by candlelight in a huge cavern or monastery. Across the top was the word "Illuminate." It could have been a reference to the illuminated manuscripts from days of yore, but my dreams usually aren't that clever.

Then again, it is possible that I'm much more clever in my head than in the real world. This has also been suggested to me by more than a few people.

So, once more unto the breach, dear friends. Armed with a pen and an introspectiveness that borders on narcissism, here I go again.

Posted by Guillermo at 22:20 No comments: