About six months ago I was obsessively watching Bioshock clips on YouTube, mainly this one with the Moby remix of "Beyond the Sea":

I just found this, typewritten on a torn piece of paper:

all bioshock and no play makes jack a dull boy
It was the best of times, it was the blurst of times. All the people that weren't starving in the streets were huddled in the trenches. Or so the newsfeed claimed. There wasn't much faith to go around, especially not for the Terran government. The system was like a child that never matured past the point of lying to your face. Startling how effective that remained, even at this point in the Magic Pony Wars.

I have forgotten that I may not live to explain this in person. It probably doesn't matter anyway. Like God, like Vishnu, like what you had for breakfast yesterday, you have to want to believe it's how you remembered it. But maybe it wasn't like that. Maybe it wasn't like anything. Maybe all there is are your whimpering words and the skeptical stare of your audience for as long as they'll listen.

It began with the God-Makers Suspicions should have been aroused by the mere fact that they named themselves that and subsequently started referring to themselves in the third person. None good signs.

Their department was a small one until some bureaucratic mis-step merged the bio-ethics with bio-engineering and then left the annual budget sheet in the printer. Suddenly there was only enough money in the Tri-Terra Media Corp. for eighteen million new lines of stem cells and a mop bucket.

I almost suspect the scamp who altered the abandoned financial document never expected it to go through. But it did. It has. We are all of us living through the result.

The blisters on my hand have not yet healed. My pace is slowing as they grow more tender. Bandages now. When will people learn? Man was never meant to play God with an unlimited budget and no stockholder accountability.

Posted by Guillermo at 09:25 No comments: 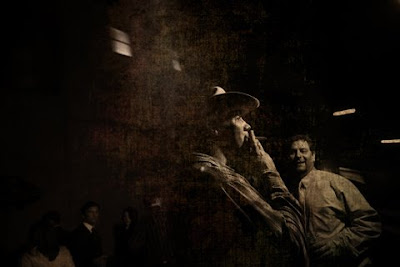 Specifically not to write, she's not worried of my voice because my voice is independent but the writing stands atop perceived romantic insecurities. In speech moments live and they pass look there just went two of them. Written writing moments sullenly defend the rivulets of pondering hiding behind them. A movie set mock-up of a life painted already peeling at the edges.

Because it's unfair. They had a plan, I had a plan, you had a plan, plans are falling like cherry blossoms and I never liked cherries but I eat them now if they're on other things I do like.

I don't speak the language there but I can learn a language for you. And not a tongue language but an art language or a music language or a living one. I'll try not to mention dreams I promise.

Does the tyranny of democracy mean the Earth spins the same direction even though we all want different directions? Crammed in a limo and we want different radio stations when the driver is behind glass and he remembers we didn't tip him last time?

I'm angry and I'm ready but if I were really ready then I wouldn't flee from teachers. I'm trying to hide infinity underneath my mattress and I almost got the corner but I can't get any more. If everybody's leaving sooner than I meant to be alone but I've been sitting on this suitcase and it's empty as my tomb.

Posted by Guillermo at 23:26 No comments: