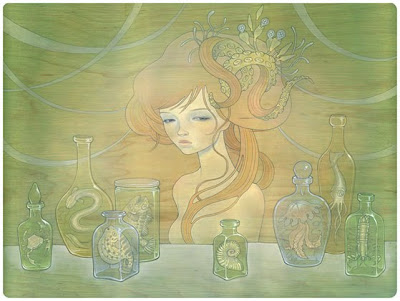 I knew Jenny Hanover a long time ago. We were young, or at least young enough that I didn't immediately think she was completely mad. Her hobby, as she put it, was "shadow walking." This slightly ominous name was her term for lucid dreaming, or being aware of dreaming while dreaming. That's how I understood it at first. Since her disappearance, I haven't been able to understand much of anything. All I can do is try to organize the events by the order in which they occurred and keep looking for a pattern; those cause-and-effect moments that let me convince myself I have any control over what happens to me.

And maybe learn enough to keep me out of the insane asylum.

Jenny explained to me that experienced shadow walkers (her term, sometimes just "walkers") mostly spend their sleeping hours dreaming like everyone else. Shadow walking is a controlled process that requires careful preparation and should never be attempted alone.

"Not like scuba diving," Jenny snapped. "You can die scuba diving. If something goes wrong after we've crossed the shadows we'll just end up back here." She set her backpack on the floor of my bedroom and began placing its contents in a row.

"Well I feel a lot better," I smiled, leaning across the doorway with my arms crossed. I was trying to look cool. Having a girl stay the night in my apartment was a rare thing in itself, and her backpack full of unusual objects was both intriguing and frightening. I recalled urban myths about stolen kidneys and began to wish I had made my roommate Phil stay in tonight. Then my socks slid on the hardwood floor and I fell backwards into the hallway. 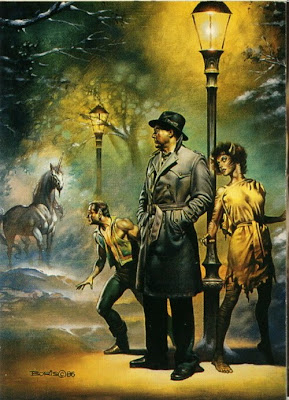 I just finished reading China Mieville's The City and The City. There are no unicorns in it. Despite this glaring omission, it is still an intriguing noir tale of a city with unusual borders.

It is dangerous for me to read crime noir. In my head I start referring to women as "dames" and whiskey and cigarettes seem like part of a complete breakfast. The world outside seems full of mystery and sinister plots and unicorns. Maybe not unicorns. Not the nice ones, anyway. Everyone is up to something. Scheming. Brooding. Whinnying ominously.

But after that book I read The World Jones Made by Philip K. Dick. Now I'm more worried about giant protozoan spores falling from space, and also of gaining the ability to see the future. This book was written well before Alan Moore's Watchmen, which also has a character who can see the future but cannot change it. Hmm...Slaughterhouse 5, too. These guys are just piling up.

So I don't want to be able to see into the future. I would only misuse the power, like predict a person's movements and make them step into a pie every time they are on their way to a formal event.

Time to start learning how to make pies.

Posted by Guillermo at 01:47 No comments: 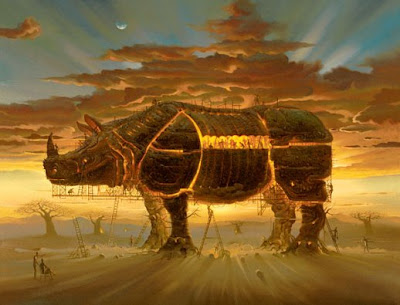 She is like the desert. Hauntingly beautiful with long stretches of an inhospitable sameness. She is water but it is best to bring your own. She has left me now to wander through sand and shale. Or perhaps I left her, slipping away under the cover of a monsoon storm. Red sky and thunder and fat drops of dusty rain. For a moment there are rivers carving a little deeper into the earth but pretty much the same for a long time.

The desert is a poor host and does not know how to treat the waters. Past the point of feeling spurned. Her dark eyes flash darkly than pass over me just as quickly back to the horizon. She loved me once. Her instincts know how to hurt me best by not seeing me at all. Not to be ignored. To ignore someone properly requires a great deal of attention. Time, the memory has been relegated to that sameness where she puts everything else.

My eyes now, which looked upon her with love and with love met, are grains of sand shifting against grains of sand. The water we shared baked into the clay. The crumbling tessellations formed by cracks could hardly hold a footprint.

Her instincts are right. I can't remember how long I've been here. Trying to find the last reflection of the way I was when I still loved her, and seeing nothing. Staring back when I look into the shrinking puddles. There is only the reflection of the sky with its wisp of cloud, and the gnarled trees, and the sand, and there is no place left for me.

So I'll go. I'll show her. I'll forget her too. If I cannot defeat a desert I will make my own. She in hers and me in mine, the forgotten and the forgetting. Perhaps all deserts start this way.
Posted by Guillermo at 08:17 No comments: 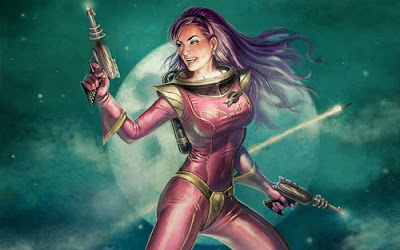 I've been going about this backwards. The last part was written first and the first part is being written last. The middle part is still the middle part.

This is a picture of a Space Princess. Democracy may be all the rage on this planet, but the rest of the galaxy consists predominantly of monarchies.

Look what I found! I started a journal/letter/epistle to my friend methinks, as I knew her then and think of her still. Back when people still used Instant Messenger programs to chat online, our time zones synced up pretty well. I was always up at some ungodly hour of the night and methinks lives in India so for her it was usually mid-morning. I used to refer to her as a "Daywalker," my term for people who didn't stay up all night brooding for no apparent reason.

Yes, exactly. We would have conversations. We don't talk a great deal now, but our lives were so different then that simply still knowing each other now has taken on a slightly reverential quality. For me anyway. I try very hard not to inspire reverence in anyone and I am repelled and suspicious by anyone who views me any more than "somewhat tolerable."

So this is for her. There is more, but not all of it has reached the 3-year mark and as such, will not be disclosed here. But here's this. 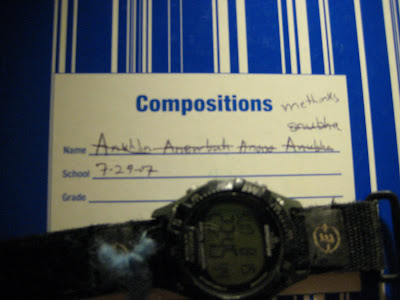 This notebook is yours and I hope you like it as much as I do. The cover reminds me a tiny bit of a circus tent or maybe a telly struggling to get reception.

These composition notebooks usually have questionable color schemes. They are hardy and inexpensive. Perhaps Hemingway and Picasso shunned these in favor of their precious Moleskin(TM) Brand Notebooks but I will write on any portable surface including my hand, napkins, and dollhouse walls. Napkins instill the greatest camaraderie. Different colors, sizes, odd folds. They are better representations of my mind, scattered as it is with crumpled thoughts. And if the idea is no good or good enough to transfer to another home then voila! I still have a perfectly good napkin.

These notebooks used to have a larger space at the top of the page. These new editions have squozen in a couple more lines. Multiply that by 200 pages and that's 400 more lines! What a deal! This boon of space must be cherished. I shall try not to skip too many lines without the best of reasons.

My clock is glowing red midnight at me. I must try to rest and heal. I have many scratches from scrabbling about on rooftops. And a few from leaping from them. Goodnight!

Today is the first day of my torrid affair with Paxil. It is a common antidepressant that regulates seratonin [sic]. I've heard mixed reviews from friends who have used it but I'm going to do science and find out for myself. This journal, your journal, is part of the experiment. Have you read "Flowers For Algernon"? It's a short story told in journal format. The main character is of below-average mental capacity until an experiment makes him a genius...briefly. The author uses spelling and grammar to illustrate his rise and fall. So be sure to watch me for spelling errors. I'm usually pretty good about it.

My friend Tana sent me a text message about her day rafting on the river in Idaho, a state north of here. I warned her to alternate paddling on both sides of the raft or else only one arm will get all the exercise and she'll end up with one huge arm.

Tana and I are dating. We haven't discussed the details of our relationship. The conversation we're going to have drifts around us like a balloon someone has tied around my wrist so it won't blow away.

We've only been dating a week. We've been friends for over a year. She is younger than I am, 21 to my 25. When she begins school, she will do so at NAU, a university in northern Arizona. The North seems to be conspiring to keep her from me. The blame rests upon me, or it may, if I follow my plan to move to New York City. NAU is richly forested and gets snow in the winter. Its climate, so different from my dusty desert, belies its proximity. A couple hours of mildly reckless driving will bring me to her. And to the snow, in the winter. I don't care for snow. Interesting stuff, but I rather enjoy it only at a distance.

I've only known one Arizona to New York relationship attempt, and though they struggled mightily to connect across the country in the end it proved untenable. Middle America can be a formidable obstacle.

The rain came today. About this time of year the frail shell of the desert is ravaged by waters celestial as they're banished from the Heavens. Encrusted in concrete as our city is, the waters become violent commuters, ignoring speed limits, stop signs, and traffic lights. We put up with it because we know the waters are just tourists here picking up souvenirs from people's landscaping and going on their way.
Posted by Guillermo at 23:46 No comments: