Sibbitt and I continue our discussion on weapons and the role of the citizen.

I have indeed been discussing "Government" as a monolithic entity, and in the assumption that this imaginary Government would want to destroy me. In a scenario where a hostile force sought to control a population rather than destroy it entirely, personal firearms are absolutely would certainly prevent it, especially in the US.

I'm happy to hear about The Oathkeepers.

I should also point out that when I read the news, I am painfully aware of the gatekeepers of this information and that simply because it is not being reported does not mean it is not happening. I strongly suspected this to be the case with cases of self-defense; such instances would likely be reported in the local news precinct, but probably not nationally unless a bunch of disabled puppies were involved.

Many, many times I have come across news reports of horrible crimes perpetrated on those who wanted to defend themselves but were unable and I've wished they had just had one gun somewhere in the house. Or at least tear gas grenades.

Again, I tend to feel this way towards people I perceive to be less capable of defending themselves physically.

I'm also for the Dune Home Defense System: The gom jabbar, a little needle tipped with meta-cyanide. I wonder if those would be legal.

So thanks for the information, Sibbitt. As usual, I feel better about most things and worried about a whole slew of new things.

Posted by Guillermo at 17:01 No comments: 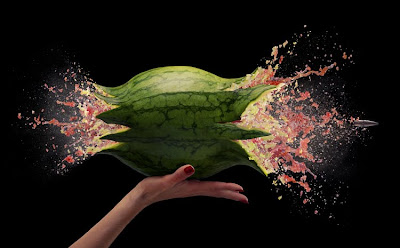 The role of firearms in my life is one I think about often. As with each and every amendment, the right to bear arms is a response to prevent a specific condition that would endanger the civil liberties of The People. In many cases, the amendment also seeks to uphold the virtues we want to see in our government as well as in ourselves as citizens and active participants.

Some are just disasters. Eighteenth Amendment, prohibition of alcohol? When I view the Amendments in context and as a continuing process of striving towards a unreachable ideal, the spirit of the law, if not the letter, begins to transcend the nightmarish technicalities and inevitable ironies of this very difficult process.

The right to bear arms seeks to allow citizens that are not part of government institution to protect themselves against force, physical force implemented by a government institution. In my apocalyptic view of things, I assume this means the Government wants to destroy or enslave me through armed conflict. I like this idea. Then the dang old irony again: How do you love something you are willing to destroy? The United States is like my parents, and maybe your parents. I love them and want them to love me, but man are they totally wrong about a lot of things.

Fear is not love. Should the Government with a capital "G" ever choose to destroy me, I don't think any firearm would protect me. Not anymore. Back in ye olde days, when it was all musket-to-musket and knives on sticks, maybe. Now that we have the deadliest, most bad-ass military ever, victory seems unlikely. Because the military is under control of the Government, and it is the most directly controlled. And the police. Pretend that a crazed police chief orders his officers to my house to arrest me because he didn't like my facial hair. The order is wrong, and I know it is wrong. Is it my duty as a citizen to take up arms against this tyranny, to battle men and women who are doing their duty? Is it my duty to surrender peacefully to avoid bloodshed? It's a tough choice, hanging on my strength of principle and amount of faith.

I have the right to defend myself. Do I have faith in the United States to not resist physically and hope the truth comes out in our judicial system? I think either decision would have to compromise something I believe in.

The right to bear arms is a good right, but I don't think a single person or even a militia would be able to withstand a government-led assault. In a scenario where every citizen is armed, the Government still controls our resources. If all of Phoenix started a revolution, shutting off our water would wipe most of us out before we could fire a shot. Sadly, we would probably tear each other apart fighting for the remaining resources. While I believe that people are not inclined to harm each other physically under normal circumstances, try not having a drink of water for a few days. You will not be yourself.

I believe in the right to bear arms. I believe there is no weapon I could acquire that would protect me from an organized assault by my state and federal government. Kinda hurts my pride.

I suppose a gun might be useful in self-defense. The effectiveness of such a defense plan kinda depends on me being prepared, and if so prepared, how I will actually know the proper course of action. I could see myself really fucking up a rescue attempt, I mean. I believe this now, even with my Army Basic Combat training. Mostly because I was trained how to fight on a battlefield, not in my kitchen or at the neighborhood grocery store.

As a bit of a side note, in Arizona I am allowed to carry handguns into bars and all kinds of places. The likelihood that I will be shot by a police officer due to a simple misunderstanding will skyrocket so I probably won't attempt this. Police have to make difficult decisions quickly in complex, high-pressure situations. If I am actually armed, the decision for an officer who is rightly concerned with protecting their own life becomes much more simple. I'm using firearms in this example but the same goes for knives, baseball bats, rocks.

In another irony of government, the onus is on me to behave appropriately during an encounter with law enforcement. Like my other example, do I believe I am right? Do I believe it enough to do battle with agents of law enforcement? What if I'm wrong? Even if I know for certain they are wrong, what is the proper role of dissent for a citizen in my situation? Another time when maybe there is no right thing to do.

Heh, I don't mean to sound indifferent towards the staggering difficulty in enforcing laws and maintaining public safety. But the irony abounds. Whenever someone I've never met with a gun walks up to me and starts telling me to do things, my natural instinct is not towards polite cooperation; it's more like RUN RUN SERPENTINE SERPENTINE. Biologically it's quite a conundrum.

Wait...I was saying something unrelated to dodging bullets. No, it is related; protecting myself against people who want to harm me. The tendency is to consider everyone who wants to kill someone a criminal, but not the person who kills that person. This is often the case, but it is a precarious assumption. Myself, I cannot think of any thing that would cause government agents to want to kill me, but I'm certain there are people who have considering doing me great harm for personal transgressions that weren't actually laws.

So should I kill them? "I'm just going to kill you; why are you taking it so personally?" Hmm.

This is more of a general musing; I lean towards pacifism but I am well aware that I am physically capable of killing without any actual weapon. A firearm would be most useful to me in the event that my opponent was using a firearm and had announced his arrival and intent in some way.

It is possible to train for such a situation, but all the anecdotal evidence seems to suggest that accurate simulations are impossible. I've heard stories and had actual police tell me about the mishaps that occur when drawing a firearm during a confrontation. Safetys will still be on, shots will miss from 10 feet away, weapons will discharge unintentionally. One police officer I spoke to had pulled his gun for the first time and had fired every single round before he had drawn it level. That time everyone was okay, the criminal had been terrified and given up immediately after.

I scour the news for stories about citizens protecting themselves and each other with their personal firearms. It doesn't seem to happen as often as I'd hope or expect. Police are by far the primary defenders of the population, even in states like mine which allows great liberty for carrying firearms.

If I were in a wishing mood, I would wish that along with our right to bear arms, we would take an active interest in taking care of each other in all the other, much more common ways.

I believe that weapons rights are important on principle, but I've come to accept that firearms are not really very useful at protecting me from the threats I expect to encounter in my beloved United States.

Also, I've come to love shooting watermelons with shotguns. Or pumpkins after Halloween when they're practically giving them away. Sometimes Nature is kind and bestows upon Mankind giant fruit with hard outer rinds and rich gooey innards.

Certainly Americans should embrace the responsibility of weapon ownership. And while we're at it, we should as vigorously defend all those other amendments that make this country worth fighting for.

Except that prohibition of alcohol one.
Posted by Guillermo at 11:41 No comments: