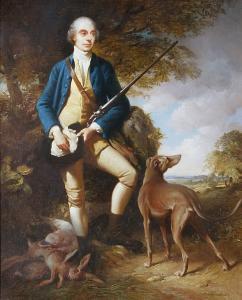 Your letter was brought to us by our manservant, Whitman, as Kelly and I were hunting the ptarmigan that occasion our estate.  O, fear not that I speak of literal ptarmigan, I would not have you think us cruel.  No, we dress up Leela (our loving but rather witless Bulle Terryer Dogg) in a vest of feathers and then chase her round the moor.  After a time, she realizes that she is not, in fact, a bird and returns with us to the manor.

It was our pleasure to attend your Commencement Ceremony.  It was a handsome ceremony indeed, as delightful and cordial as the liqueur we sipped throughout.  It was much more pleasant than the last commencement ceremony we attended (at that dreadful Upper Whitspinster's Academy).  That was held out-of-doors as well, but instead of chairs we sat upon marble columns that had been specially erected and then knocked down for the occasion.  It had all the grandeur of a pagan goat sacrifice, but those have been out of fashion for weeks, and the solemnity of the occasion trickled away like so much wasted goat blood.

And bravo to your administrators for such skilled herding of the students!  At Whitspinsters, the faculty had invoked an archaic taxonomy that placed the most intelligent students in the center of a sort of spiral that wound outwards as students of lesser aptitude made up the outside coils.  The end result was that the students who were able to understand and follow the basic directions to move towards the stage were unable to move at all as they were trapped in a sort of moat of buffoons.  This remarkably inefficient system, I understand, developed in ancient times and served to protect the more intelligent students from the Saxon raids that used to plague such Commencement Ceremonies.  The ruthless marauders would make off with pamphlets, shawls, folding chairs, and any vaguely congratulatory greeting card.  The envelopes they left behind, presumably because they lacked a postal system.

Sink me!  Leela has eaten her feather vest!  This will not bode well, as she has an imbalance of the humours that rend her all but senseless when ingesting avians or their spoor.  Birds, (being of the air,) cause her bile (corresponding to the element of the earth) to increase at such a prodigious rate that she risks expanding to the size of a wild yak.  Thus begins such a riotous frenzy of vomiting so forceful that all of us in the vicinity scramble to find immediate shelter.  After we emerge, we often find the projective force of Leela's internal heresy has launched her like a furry cannonball to a distance of a half-league or more.

I will soon press this letter into the tobacco-stained hands of our manservant, Whitman, and bade him speed it to you as quickly as he can.  Of course, there is always the risk that his boorish thoughts will turn to spirits, naps, or both, but all we can do is hope.  And perhaps I will dare to a bit unfashionable and offer a bit more of this goat's blood to the Great God Pan, that Whitman's feet be as swift as those of our Hirsute Cloven Master.

House Lopez
Posted by Guillermo at 00:07 No comments: