Please forgive my recent silence.  There has been much to think upon.  There still is, in fact, but being quiet is not one of my strengths.

My time as an employee of HALO has come to an end.  Working with animals is a singular experience.  They live, they breathe, they play, they eat, they sleep.  They have needs and desires, they know fear and they know love.  In short, they are alive.  It is the nature of our work to expose ourselves to some elements of risk that are unique to working with animals. These risks can never go away, but they can be minimized.  In animal rescue, I believe I must first do no harm, by action or inaction.  And, in that way perhaps unique to human beings, my actions did not follow what I believed.

I violated a safety protocol.  I increased the chance of risk rather than minimize it.  By allowing the possibility of harm, I failed in my duties.  It was my actions that brought about this consequence.  It was my decisions that led to this conclusion.  The responsibility is mine.

It has been difficult.  Almost 3 years ago I came to HALO feeling very much like a stray myself.  I was still reeling from the death of my youngest brother, and though more than a year had elapsed I had come no further than a vague understanding that the world no longer had my baby brother in it.  As for this new world, I wanted no part in it.  I was constructing a wall around my heart.  Brick by brick, I was shutting out my friends, my family, even my own wife.  I hesitate to speculate on what might have happened if I had managed to place that final brick.

That's how HALO met me; a quiet, distracted boy was often late and frequently called in sick.  But when he was there he worked hard, and he seemed to be able to connect with dogs who were too scared or too hurt to accept the comfort of most other people.

I think now that perhaps those dogs recognized that I, too, was lost and injured in a world that took the ones I love and, in return, gave me only a cage to sit inside and watch the world go by.  To these dogs, I was more like them than I was like those "humans" who walk about in complete control, masters of all they survey.

With my short employment at HALO already in jeopardy due to my struggles to simply make it out of bed each day, a new dog arrived.  He seemed friendly enough to me.  When the time came for the dogs to go outside and play he did not go with them.   "Why can't he go outside?" I asked.

"Oh, him?  We can't let him play unsupervised.  He can jump over walls."

It was not that moment that everything changed for me.  It was not that moment when my life began to get better.  I was too far gone for revelations, my heart chipped too dull to fall in love so easily.  For the next two months, I did everything I could to try to get this dog adopted.  He was housebroken, good with kids and cats, loved to play fetch, and downright handsome.  I never neglected to mention his wall-jumping talents, but I also explained how he never ran away; he would just come right to the front door of the shelter  and wait to be let back in.  "And," I would tell them with sincere admiration, "He's smart enough to open his kennel if we forget to put the extra fasteners on the door.  But usually he just goes over to the toy bin, roots around until he finds a toy he likes, and then goes back into his kennel."

Everybody liked him, but no one was willing to adopt him.  When it came to time to select a dog to The Maddie's Fund Adoption Center (a 25 minute drive away where he would stay until he was adopted), I spoke up.  "Send this dog!"  I wanted him gone.  I was working hard to shield my heart from anything belonging to this new world I so despised.  And this mutt was ruining everything.

He was sent to Maddie's the next morning.  As I cleaned out his empty kennel I felt something stir in my chest.  I told myself it was relief, but the lie evaporated as quickly as I thought it.  I knew what this feeling was: regret.

That afternoon we got a call from the Maddie's Adoption Center.  "You gotta take him back; he's climbing over the walls of the runs like they're nothing."

Then there he was, smiling up at me from his freshly-cleaned kennel.  I knelt down and stuck my fingers through the bars and petted him.  What a strange creature.  He's charming, he's stubborn, he's clever, and he does not know how to give up.

That was the moment things started to get better.  I adopted him, much to the consternation of my wife, who was assuredly not a dog person.  After a few hours with this particular mutt, however, she was.  We named him "Watson."  It was that day, my wife and I playing with our new dog, when I felt a glimmer of being a real person again.

Thus, my interest in saving animals is purely a selfish one.  They need us almost as much as we need them.  As times change and technology brings us closer together while simultaneously pushing us further apart, our companion animals remind us what it means to be human.  They teach us that what's important doesn't really change.  I'm trying to work in a technology joke about dogs having a "classic point-and-lick interface" but I can't think of anything equivalent for cats so I'm going to have to abandon that idea and move on.

The purpose of this long-winded preface is to give weight to the words that now follow.  I loved my time with HALO.  I've never had a job where I couldn't wait to get out of bed in the morning.  The time I spent as a volunteer coordinator was far too short a time to spend with such fine people.  The dedication, the skill, the talent, and the energy of our volunteers made every day a gift.  I am honored and humbled and extremely proud of everything we've accomplished together.  I'm extremely grateful that you are there to keep fighting to save the lives of the animals that may one day go and rescue a human of their own.

I am grateful for the time that we had.  I loved working together.  It's not enough to simply love, however.  A person must protect what they love, or risk losing it.  Carelessness sinks more ships than storms, I imagine.  So, my staff, my volunteers, my friends, my HALO.  You were mine for a little while but I can't adopt you all.  I feel sorrow, yes, and losing you is like losing a part of myself.   But be glad, as I am glad, that somewhere out there a boy and his dog are laughing and playing in the big beautiful world, and they never would have had that without you. 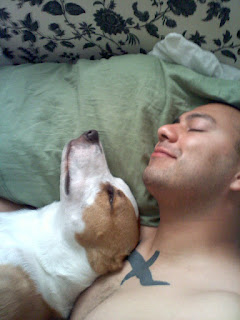