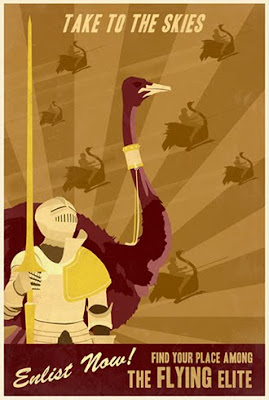 Someday in the future, the world will be divided into two mega-corporation-nation-states: Lance-Corp and Ostrich-Abuv. These two massive entities control all of the Earth's resources and have decided that we, the consumer, will only need two things. Lances and flying ostriches.

There are some by-products. The Lance-Corp factories spew molten effluence. Behind your local Ostrich-Abuv is a pile of bad eggs, some of which will hatch into pterodactyls.

An entrepreneur from the past will awaken from cryogenic sleep into this world of fire and feathers. He (or she) will get a loan and purchase a flying ostrich and lance. Whatever is left over she will use to buy some clones. She will take to the skies and bring down both mega-corporations by killing them all in true capitalistic fashion.

At least that's how I think it will happen.

The cats tend to be more dignified. Felines have a cool, collected demeanor and grace of movement that I aspire to but am confident I will never achieve. They're also a lot pointier. Cats can't seriously injure me. Hmm...maybe if they went for the eyes. I've been bitten once so far but I felt bad for the cat because it bit my knuckle and its mouth was stuck on it like a little kid trying to eat a caramel apple. I have big knuckles. And sometimes they are covered in caramel.

My cats are my little tigers. Fierce, but incredibly vulnerable.

After a while, most of my Pandora stations begin to sound roughly the same.

Posted by Guillermo at 22:38 No comments: