Had a great time at Emma's birthday gathering. Irish car bombs were involved.

I was entrusted to take care of dogs at friend's house. I took duties seriously. 3 am found me driving deep into Ahwatukee to feed and water said dogs.

There were no other cars on the dark, winding street when my car died.

I coasted as far as I could and then jumped out. Metal met clavicle, and I pushed my car (I was barefoot, once again) into a Fry's grocery store parking lot. I used to come to this Fry's to buy food for my developmentally disabled clients. DC worked here at that time. It's good to see one of us has gotten far, far away.

I popped the hood and checked what I could. Everything seemed normal. I yanked out the dipstick to check the oil. I ran two of my least-used fingers along the burning metal blade and took the levels. It read normal. I pondered.

I know my car. It is acting like it doesn't have enough oil. I'll be damned if I'll
listen to a stupid burning metal blade to tell me what's wrong with my car.

I grabbed the quart of oil I keep under my seat. I never leave home without a quart of oil. I dumped it in the engine and tried the car again. It started fine and I made my way to my goal without interruption.

Until I got there.

The front door of the house was locked. In all my years of coming to this house for fun and business, the door has never been locked. Stranger still, no dogs barked. Odd.

I pondered again. I shouldered my overnight pack and walked around to the side of the house. The wall was the same height, which meant I could still climb over it. I did so.

I tried to open the back door. It too was locked. Again, this has never happened to me before.

I gambled my last chip and tried the tiny doorway to the master bedroom. It opened. Dogs came pouring out. More dogs than I remembered. I froze as they yapped and licked at me.. I sensed rather than saw a person...no, two people. People breathe differently or something, I'm not sure what it is that makes them stand out in darkness. I called out "Hello? This is Guillermo..."

My pupils flared to adjust to the darkness. I heard a voice that sounded familiar but not familiar enough.

It was the daughter of the owners of the house. Her fiance' was with her. It seems that they too were entrusted with the safekeeping of the dogs and had chosen to spend the night, as I would have done.

So we chatted. I explained why I was there, and they, they didn't shoot me in the chest. It was a pleasant time. Having fulfilled my promise, I left the house knowing the pets were taken care of.

On my way back, a scantily clad woman flagged me down. She was also barefoot. I stopped, asked her if she was all right. She said her boyfriend had beaten her, stolen her truck, and was trying to get to a nearby gas station.

Mama didn't raise no fool. I offered to call 911 immediately. She declined. I conversed politely after that, quite wary and traveling at a higher than normal speed (because for you non-paranoids out there, if someone in the passenger seat is going to take you out they'll wait until you're at a low speed to avoid a deadly crash).

So it went until we got to a gas station. I pulled up the front door and she stepped out. As the door swung shut, I leaned towards her. "Just so you know, I don't believe most of what you've told me."

A broad smile cracked the thick layer of her makeup. "Why's that?"

I shifted into reverse and checked my rearview mirror. No one was behind me. "Just be careful." I stepped on the gas and drove off.

Times like these I admit that I don't know what I am, just that in dangerous times, I could end up being very useful.
Posted by Guillermo at 04:35 No comments: 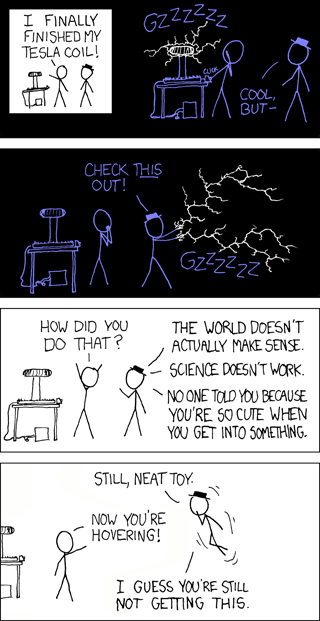 All I want is for everyone to love xkcd as much as I do.

Also, I too am comfortable with my beliefs being shattered if it means I get to hover.

Science Friday-ers, here are some interesting articles. Most are from Slashdot, but I don't want to tell you that because you'll realize you don't need me at all.

Al Qaeda manipulating video images (first paragraphs are about quantization and error analysis stuff that I don't really understand but the rest of the article is good to know.)

Robots with guns! Not exactly ED-209 but it's getting closer. This news comes shortly after the plan to build robots with Tasers (and Taser has released electric shotgun rounds). Only military and law enforcement get the robots for now, which fills me with dread because an old gypsy fortune teller told me that the last words I would ever hear would be "Run program: Excessive Force."

Also, we learn like monkeys. I intend to implement these techniques on my nephews immediately. I'll have to stock up on food pellets. This article is also useful for people who engage in "studying."

Posted by Guillermo at 10:03 No comments:

I know deep down that I shouldn't let the twins play with the baseball bat but bless their hearts, they love it so.

And I definitely shouldn't have painted the dog up like a baseball. But he's happy this way too, and it's non-toxic paint this time.

In other news, I saw a sneak preview of Superbad. For all of us who miss Michael Cera's inspired awkwardness from Arrested Development, this film will chase away the shakes and those pesky cold sweats.

Posted by Guillermo at 09:44 No comments:

That poem was about walking three miles home in the middle of the night with no shoes, no phone, no wallet, and no keys.

It was a good night overall, but I expect to be banned from all future wearing of Hawaiian shirts.

I keep forgetting that Hawaiian shirts are not a right, they're a privilege.

Posted by Guillermo at 23:22 No comments:

Email ThisBlogThis!Share to TwitterShare to FacebookShare to Pinterest
I walked three miles barefoot in the snow
no
no snow
I was barefoot though
the street tore at my feet
prickles and sparkles of broken glass joined in
and sang a scarlet passage when
I passed the houses of my friends
I'd be no surprise unwelcome then
to wrap torn skin hard to explain
the rooftops show no mercy when
gravity's made a convincing claim
makes the heaviest part of you
your back breaks
knees buckle and try to lie
to parts that don't deny hurt

EDIT: Drunk poetry? This is new...well not new, but it has been a verra verra long time.
Posted by Guillermo at 05:30 No comments: