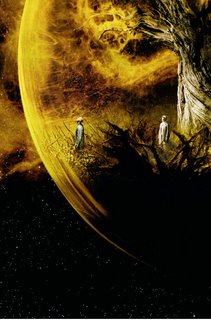 I was about to hop into bed. On the brief way from my doorway to my bed in the closet I flicked on the soundtrack for The Fountain. So here I am.

The film is beautiful, the soundtrack exquisitely deliberate as DNA from an angel. Harsh at times, so perhaps it was an archangel.

It is a thoughtful movie, and thus I place it into my Qeue of Favoritest Thoughtful Films along with:

I think there are a couple more but they are not coming to mind.

These movies that draw their power from...hmm. The moments between. The quiet that comes when the character stands and faces the world and the world contemplates them right back. They are alike in that moment, alike as they ask themselves "What is this?"

Looking at my list, they could also be grouped as Lonely Guys Do Stuff For or Because of A Girl Films.

But really, so many things fall into that category that it's hardly useful.

Posted by Guillermo at 23:22 No comments: