Watson's biopsy on his splenic mass came back negative, aka benign. It's a good thing. The lung mass is still an unknown. Overall, he's feeling much better. Enjoying his current diet of rice and ground beef. He seems happy.
Posted by Guillermo at 10:34 1 comment: 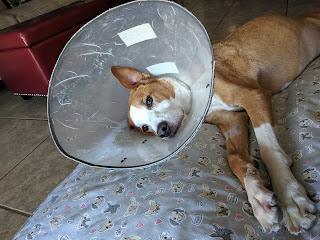 Watson is recovering at home and I am glad. He had not one, but three pieces of different toys in his small intestine. Seem to have been in there for a while. The vet removed two feet of his small intestine as well. He's eating small amounts of food, drinking water, and even trying to climb on to the bed even though he's not supposed to until he heals more.

When the vet x-rayed him, they found a growth on Watson's spleen and a large mass on his lung. We had the spleen removed since they were already in there for the toy removal, and that's currently out for biopsy. It's probably malignant, considering the lung mass. The mass on his lung would probably require a lobectomy to remove, and we're not going to put him through that. If it's as it appears, and the splenic tumor already metastasized and caused the lung cancer, his life expectancy is less than a year.

We'll see how fat we can Watson until the cancer gets the rest of him. The Lopez Family Motto is: "Always go out fighting. Unless you can go out eating; then definitely go out eating."

I do love this hound.
Posted by Guillermo at 12:54 No comments: